There is nothing in the world like a great hand-wired tube amp, and the Orange CS50 presents one of the finest examples of their spectacular tone, bulletproof build-quality, and superior dynamic response. Made with premium high-quality components like heavy-gauge copper wire, the CS50 is built to deliver authentic British tone that will inspire you for a lifetime. Though it's a one-channel amp, it's quite versatile, and it is capable of delivering the full range of classic Orange sounds as well as some that you might not expect from an Orange. There are a plethora of inspiring tones waiting for you within its two 12AX7 preamp tubes and two EL34 power amp tubes, so let's dive deeper and explore all the vintage-inspired British sweetness the CS50 has to offer.

Let's start with the basics: the CS50 is a simple, straightforward amp with easy-to-use controls and a few key features that increase the number of sounds at your disposal. It has a three-band EQ that has enormous range, allowing you to sculpt your tone freely and find every shade of Orange your heart desires. Also, there's a gain knob and a master volume, so you can get that gorgeous crunch at lower volumes. Beyond that, there's an HF Drive control that shapes high-end harmonic response until you hit about three o'clock, after which it introduces negative feedback to the amp's output stage, which thickens the sound and adds an extra dose of harmonic richness. There's also a footswitchable EQ lift, which takes the EQ out of the circuit completely, which makes the amp sound more robust and boosts sustain. Finally, you can run it as a Class A amp at thirty watts for a sweeter, more chime-y, touch-sensitive tonality, or as a Class A/B amp at fifty watts for more fullness, midrange punch and aggressiveness. In all settings, the CS50 maintains exceptional dynamic response--so much so that it feels almost like an extension of your instrument.

When you run the CS50 clean, it sounds beautiful. In A/B mode, the midrange has wonderful warmth and woodiness, the highs sound sunny and clear, and the lows are tight but present. In Class A mode, it has a delectable jangly quality with lush high-end harmonic content. You can use the HF knob, the EQ, and the A-A/B toggle switch to dial in everything from warm, mellow sounds perfect for jazzy excursions to spanky country sparkle and everything in between. All sorts of slightly-hairy pushed clean sounds can be found in either channel if you want a bit more grit, too. And, it works quite well as a pedal platform when you run it clean!

Of course, when you turn up the gain, the CS50 produces the pinnacle of British crunch. In A/B mode, the midrange growls and bites like an ornery underfed Grizzly bear looking for a meal. The lows are burly but well-defined, and the trebles have a powerful snarl. In other words, it makes you feel like Angus Young when you hit a big power chord! In Class A mode, the highs clang like an angry church bell, while the mids are focused and cutting, and the lows are tight and clear--think the intro to The Clash's Should I Stay or Should I Go? Again, using the intuitive controls, you can dial in pretty much every variety of crunchy British goodness under the sun. So, it can handle just about every subcategory of the rock genre with great aplomb. While it wouldn't necessarily be the best death metal amp, the CS50 can definitely get into old-school Sabbathian metal territory when you crank the gain.

As you can see, the Orange CS50 can do it all: blues, jazz, country, rock, indie, and even metal! It's a stunning example of Orange's meticulous craftsmanship, and it will give you a lifetime of British tone thanks to its superior build quality. If you seek an amp with ALL the British sounds, look no further than the Orange CS50. We have no doubt that it will inspire you to no end. 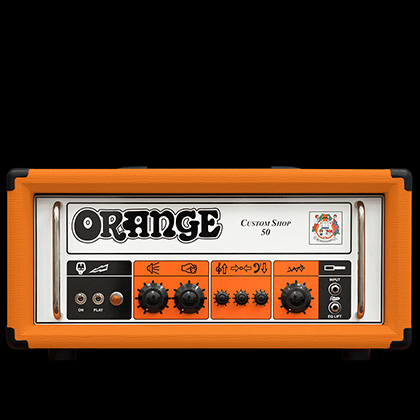