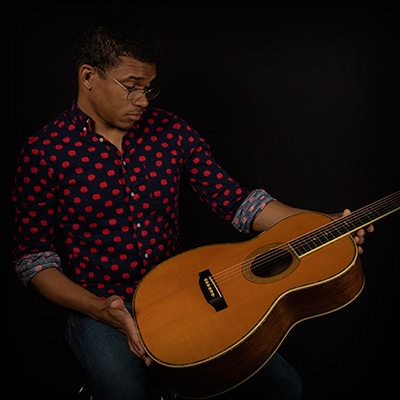 A DEFINING MOMENT IN YOUR MUSICAL JOURNEY:
I gotta list two – Playing 32 Pre-war Vintage Martins and Gibsons in ONE DAY. Being the temporary guardian of a 1930 Martin 000-45 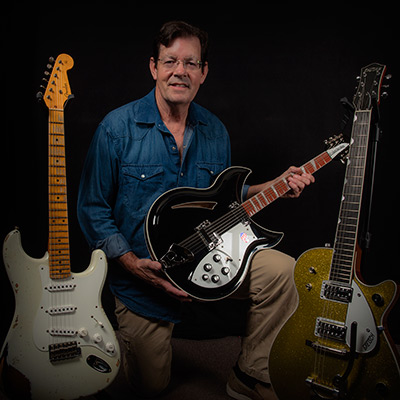 A DEFINING MOMENT IN YOUR MUSICAL JOURNEY:
My first Jimi Hendrix Experience Album… I traded my winter coat to my best friend’s older brother for it after he put it on the turntable and played it for us. I walked about a mile home in the snow with the record tucked under my arm to keep the snow off it. 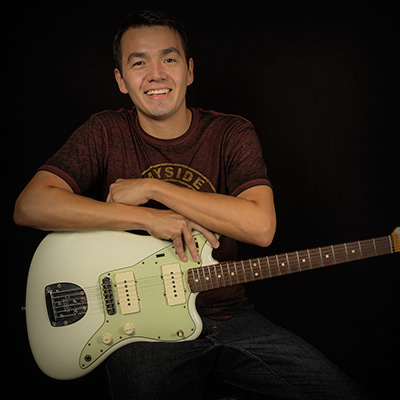 A DEFINING MOMENT IN YOUR MUSICAL JOURNEY:
Hearing Revolver by the Beatles for the first time just blew my freaking mind. Every single track is a beast and historically this is where I believe the band truly got “experimental.” They laid down some fantastic blueprints for all future artists. I will be buried will this record.

FAVORITE GEAR YOU OWN:
A 1960’s Airline guitar amplifier which was previously owned by my great grandfather. This was the first amp I ever plugged a electric guitar into and I’m blessed to have it in my possession. Portable, practical, and 99% original. Looking forward to passing it on to my daughter. 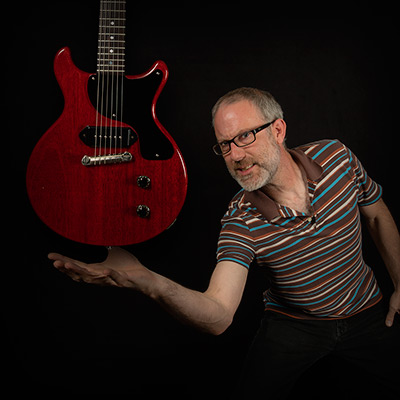 A DEFINING MOMENT IN YOUR MUSICAL JOURNEY:
I’d have to say being forced to learn the Suzuki method as a young boy. Hated it at the time, but it has shaped how I listen to and think about music.

FAVORITE GEAR YOU OWN:
Working at this shop I am a bit spoiled, but I’d have to give a shout out to the Friedman Smallbox. I just cannot make it sound bad… and I’ve tried! 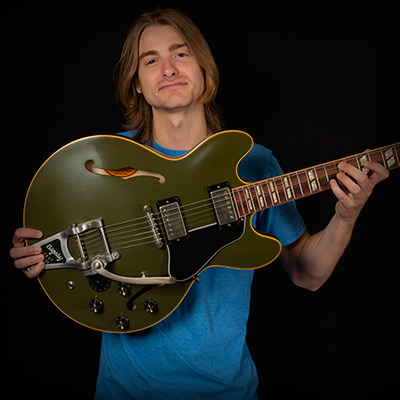 A DEFINING MOMENT IN YOUR MUSICAL JOURNEY:
The Beatles and Eric Clapton completely changed my life. I must have listened to Rubber Soul everyday for a year and became obsessed with every piece of gear that they used in the studio. I also found a copy of the “Beano” album by John Mayall and the Bluesbreakers on vinyl and had to learn every riff. Not only did Clapton’s tone take my breath away, but his raging vibrato on that record really shaped my own playing and ear. 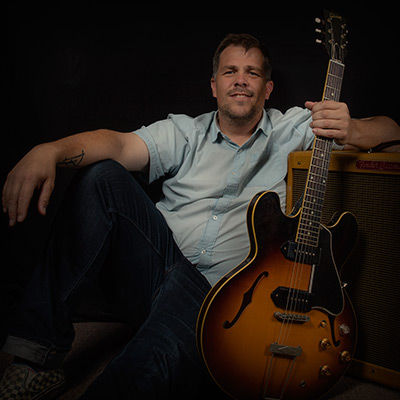 A DEFINING MOMENT IN YOUR MUSICAL JOURNEY:
I was always a lover of rock n roll and saved my allowance every week for a new record. In 1987 I was introduced to Minor Threat and that was the first time that music truly moved me. The first time I really related. From that point forward I knew that music was always going to my way of expressing myself.

FAVORITE GEAR YOU OWN:
I love, love, love P90s. My ES 330 through my Tweed Bassman is about all I really ever need. 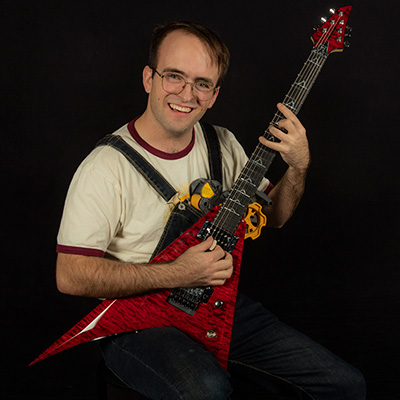 A DEFINING MOMENT IN YOUR MUSICAL JOURNEY:
I was five years old, and after a long day of learning about shapes and spelling four letter words, my dad put on a cd and cranked the volume. The noise of Queen’s “A Night at the Opera” reverberated through the walls of my house and I made my way downstairs to hear “Bohemian Rhapsody” for the very first time. My world was forever changed, N’Sync and The Backstreet Boys were obliterated from my musical consciousness and a lifelong journey of audiophilia began. Throughout my formative years my parents took me to see some of the greatest acts rock n roll ever produced. The Who, Paul McCartney, and of course Queen (twice). I am a music junkie to my core, seeking out new, exciting veins of music to endlessly dig in to. For me, there are few things more beautiful than bonding with music and having it lift your soul.

FAVORITE GEAR YOU OWN:
Spoiler alert: it isn’t the Jackson Flying V in my picture.

I have a 1986 Gibson Les Paul Studio Standard that my dad purchased brand new, he gave it to me a few years ago. While it isn’t a single piece of mahogany with a gorgeous flame maple top, it is mine and I love it. I also have a 1996 Fender American Telecaster that I bought off my friend for 300 bucks. It has massive gouges in the finish and it’s missing the tone knob but dang, it makes me feel like a better guitar player than I am. Isn’t that what we’re all looking for? 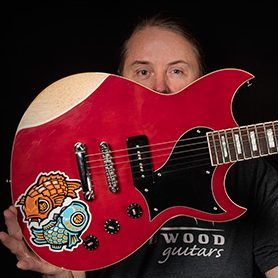 A DEFINING MOMENT IN YOUR MUSICAL JOURNEY:
Hearing “You Don’t Fool Me” by UFO 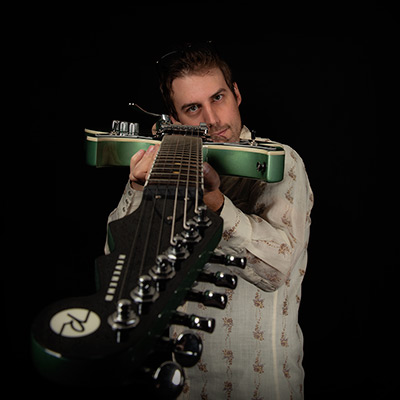 A DEFINING MOMENT IN YOUR MUSICAL JOURNEY:
A group of high school friends threw me into a van to attend my first ever live concert (Blink 182) which led to a life of music discovery, record collecting, and even joined some garage bands along the way.

FAVORITE GEAR YOU OWN:
Fender Deluxe Strat and a Martin Ukulele 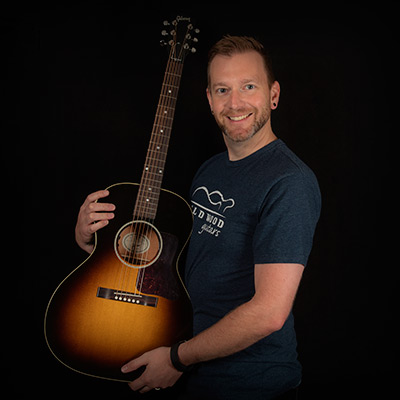 A DEFINING MOMENT IN YOUR MUSICAL JOURNEY:
A defining moment in my musical journey was the first time I heard Beastie Boys “License to Ill” in like, the 4th grade. I listened to that tape so many times I wore it out. After that I became obsessed with Hip-Hop! When I got older and started playing guitar, it was when I heard the album Pure Guava by Ween. They broke all the rules when it came to making music. I loved the super experimental sounds they would come up with and all the different styles they fused together. It led me to go to recording school and start recording all my own music and dive deep into music production. 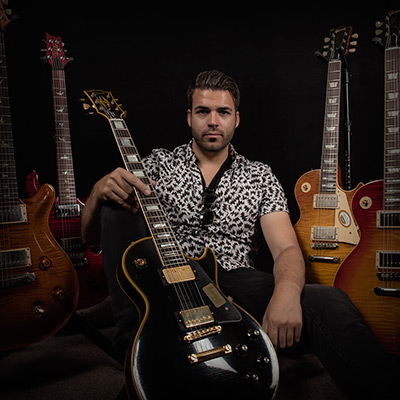 A DEFINING MOMENT IN YOUR MUSICAL JOURNEY:
There have been so many incredible moments and stories that I could share, from having the honor of tracking at Sound City to spending time with some of my heroes in this amazing industry. At the end of the day, nothing compares to the phenomenal relationships and extraordinary people I’ve had the pleasure of meeting over the course of my journey here at Wildwood. It’s their stories, their defining moments that have certainly enhanced my life in ways I could have never imagined. I’m eternally grateful for the opportunity to inspire others, and the resulting contributions those amazing relationships have made to my life. To be here; to be a part of this family, is something in and of itself, extraordinary, and I’m so humbled to be along for the ride.

FAVORITE GEAR YOU OWN:
From exceptional Gibson Custom Shop treasures to Paul Reed Smith masterpieces and extraordinary Friedman amplifiers, I love it all. There’s nothing quite like that special instrument that makes you smile every single time you open the case or hit that first chord. There’s no other way to describe it: it’s simply magic. 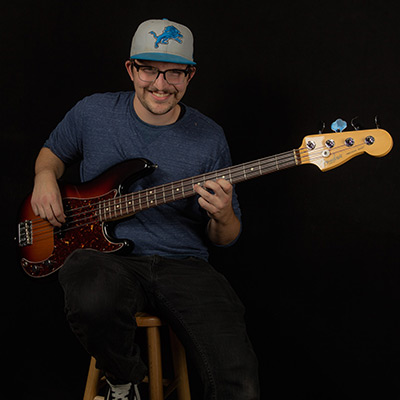 A DEFINING MOMENT IN YOUR MUSICAL JOURNEY:
When I was seven, my dad reached into his cassette case and introduced me to AC/DC’s “Back in Black” on the long drive up to our vacation spot in the Upper Peninsula of Michigan. About halfway through the trip, he revealed a secret: AC/DC had OTHER albums! He popped in “For Those About to Rock” and we reached the title track right as my mom saw a farmer’s market she wanted to check out. When my mom got out to shop, my dad rolled down the windows, turned the stereo all the way up, and proceeded to teach me the true meaning of the words “rocking out.” If looks could kill, half the people looking at fruit that day would be in jail for murder, and my poor mother was embarrassed half to death. I was already a fan of loud guitars, but once I learned that you could ruin a quiet afternoon with rock and roll, I was hooked for life. What can I say? I never liked quiet afternoons much.

FAVORITE GEAR YOU OWN:
I am deeply satisfied with my bass rig. I have a 2013 American Standard P-Bass that I play through an Ampeg V4B with an SVT Heritage 2×12, and it doesn’t get much better than that! But, I’ll shout out an under-appreciated gem that I consider the third cornerstone of my sound: the humble DOD FX10 BiFet Booster. The FX10 was originally designed to help acoustic guitars sound better when plugged-in, but it’s way better on bass! I use flatwounds, and the FX10 helps me gain just enough clarity and bite to stand out in a mix while retaining the dark, pillowy quality of the strings. It sounds way too good to ever turn off, so I never do! 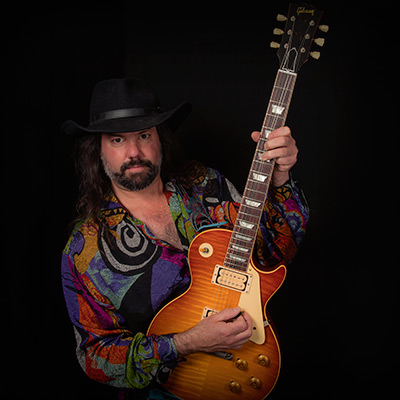 A DEFINING MOMENT IN YOUR MUSICAL JOURNEY:
Hearing Randy Rhoads play “Crazy Train”. My friend Ted was playing along with the record, and I knew at that moment this is what I want to do for the rest of my life. I quit playing baseball and all other sports to focus on guitar. If you play the guitar, you are in the club. It is such a cool club to be in.

FAVORITE GEAR YOU OWN:
I own quite a few guitars I love including Les Pauls, Teles, Strats, Jazzmasters, a Johnny A, a Johnny Winter Firebird, a 1967 Gretsch, a PRS, Danelectros, Silvertones, Marshalls, Fenders, Bludotones, and Gibson amps. Don’t get me started on pedals!