Orange-Ya Glad this Amp Can Do it All?

Wildwoodians, we're not sure why this amp is called the AD30HTC, but we'd like to think the "AD" stands for "Awesome, dude!" because that's how this amp sounds. If you have any fondness in your heart for vintage British chime, sparkle, punch, or crunch, you will love the AD30HTC, too. It's a two-channel, thirty-watt beast of burden that evokes the classic sounds that helped form the backbone of rock and roll. With its two channels and its powerful EQ, it can cover a vast amount of musical territory in a wide variety of genres from rock to indie to metal to country to jazz to blues, making it one of the most versatile amps Orange offers. It's also loud enough to melt your face clean off if you crank the master volume, but you can also get distorted tones at low volumes by backing off the master and cranking the gain. Let's dig deeper and see what inspiring tones are waiting for you within its valves.

Channel one has the cleaner voice overall, but make no mistake--it can still get down and dirty. It has round, robust low-end, transparent midrange response, and a shimmering, sparkling highs. At lower volumes, it has the sort of lush, three-dimensional clean sound you can get lost in, and when you dig in, you can get a surprising amount of spank. At higher volumes, it gets into gritty, thick, roaring overdriven territory. When you crank it all the way up, you get glorious rich distortion with plenty of harmonic saturation.

Channel two has a much worse attitude than channel one, and its nasty disposition lends itself well to more aggressive tones. In general, it has tight low-end beneath snarling, punchy mids and bell-like chiming highs. At lower volumes, though, it sounds quite pretty: jangly and sparkly, with plenty of woody midrange response beneath to give body and fullness. The more you turn up the volume, the meaner the amp gets. The midrange punches and crunches with the best of them, the highs sizzle, and the lows remain tight and articulate. At high gain settings, it has robust overtone response, but it remains well-sculpted and defined.

Both channels are incredibly responsive to player input, and you can alter their tone significantly with your technique. This makes playing through the AD30HTC a remarkably dynamic, expressive experience.

We're proud to present the Orange AD30HTC, a supremely versatile tube-driven beast chock full of vintage-inspired sounds. If you like classic sounds, the AD30HTC may make you contemplate guitar monogamy. We invite you to plug in to one, crank the volume, and see for yourself why we fell in love with the killer tone of the Orange AD30HTC. 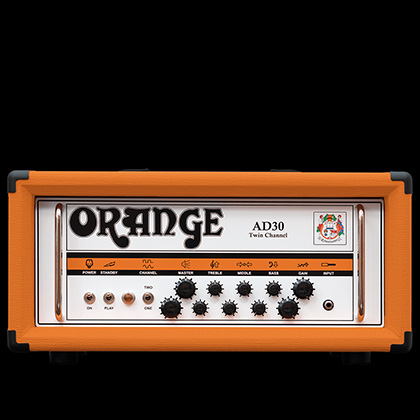