As the lead guitarist for Gene Vincent and His Blue Caps, Cliff Gallup was one of the first true rock stars of the guitar world, but his career almost ended before it started! When the band signed to Capital Records, they arrived at their first recording session to find that the record company had hired a bunch of session guys to play on the tracks. After a tense standoff, the record company man decided to let the Blue Caps play one song to prove their mettle. Cliff Gallup plugged in his Duo Jet, and ripped through two spellbinding solos on a tune called “Race With the Devil.” Afterwards, the record company man informed the session players that he no longer needed their services, and the legend of Cliff Gallup began. Cliff wasn’t much for the rock and roll touring lifestyle–he was a married man, and he hated being away from his beloved wife and daughter–and he left the Blue Caps after less than a year, but he left an indelible impression on rock and roll with his fiery, virtuosic playing. Though he only ever played on thirty-five Gene Vincent tunes and a mid-60s solo album called Straight Down the Middle, he left quite a legacy! For guitar luminaries like Eric Clapton and Jeff Beck, Cliff Gallup’s Duo Jet was the proverbial “one guitar” that blew them away and made them want to play rock and roll. In fact, Jeff Beck recorded an entire album of Gene Vincent covers in 1993 because, as he put it in an interview with “The Guitar Magazine:”

“When I was learning guitar Cliff Gallup was the biggest influence on my playing – the cut was pretty deep and the scar has never healed! It was just so radical – it probably doesn’t sound metally or threatening now but if you were back in June ’56 and turned the record right up… Boy! The term ‘rock ‘n’ roll’ had hardly been bandied about and all the other ‘rock’ records of the time were very polished and audibly nice and round. Then you put on Gene Vincent and had this guy screaming and these raucous guitar solos – it was unheard of and no one has done anything like it since.”

After quitting the Blue Caps, Cliff Gallup worked for the Chesapeake, Virginia public school system for over thirty years. He never toured or recorded again, but he played guitar every day and moonlighted regularly with local bands. In fact, forty-eight hours before he passed away of a heart attack, he was on stage playing a gig in Norfolk with a band called the H-Los. Cliff Gallup could have used his six-string skills to achieve incredible wealth and fame, but he didn’t. He played guitar purely because it was fun, and that’s more important than having a platinum record or seeing your face in a guitar magazine.

Nevertheless, a player as good as Cliff Gallup couldn’t stay out of the spotlight for long. Some people have such incandescent talent that obscurity eludes them, and the fine people at Gretsch have done his legacy justice with this Cliff Gallup Signature Duo Jet. The neck has that classic Gretsch feel thanks to its classic “U” profile, 24.6″ scale-length, vintage-style frets, and 12″ radius. It also sounds just like a vintage Gretsch because of its stellar Dynasonic pickups, vintage-correct aluminum bridge, and choice tonewoods. Frankly, it doesn’t sound too far from the Duo Jet Mr. Gallup played on those classic Gene Vincent recordings! So, the Wildwood team is proud to showcase this Cliff Gallup signature model, both because it has the sort of sound that will inspire you endlessly and because it reminds us that finding joy in your instrument is the most important thing a musician can do. 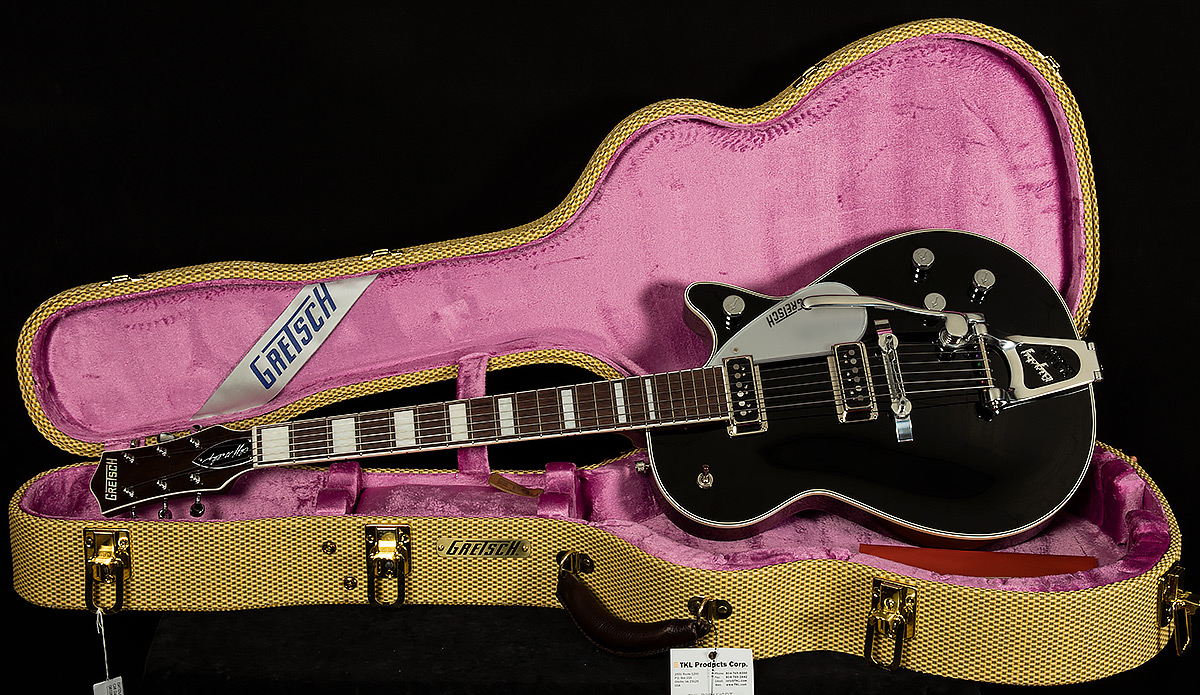