The Whaler V2 is an original fuzz pedal that takes your guitar from a Velcro monster of the depths, to a massive attacking beast of the sea. Built on a desire to find the elusive tone that is always taunting us, the Whaler V2 uses a truly original dynamic fuzz circuit that takes you from a pushed tube amp tone to fuzz hysteria. Dive into its deceptively simple controls for a deep wealth of tone unlike any other fuzz pedal. This new version has an added gain stage, substantially increasing The Whaler V2's range and depth of sound.

SCULPTING YOUR FUZZ
Achieve different fuzz and gain tones using the "Sustain" and "Squish" knobs. "Sustain" is a wide range control that lets you dial how hard the signal hits the front end of the circuit, taking you from a dirty drive to a thick, blubbery fuzz. The "Squish" knob adjusts the positive bias of the different gain stages, which changes the overall characteristic of the gain, from a ripping velcro, gated sound to a more open traditional fuzz.

DYNAMIC TONE CONTROLS
The Whaler's dynamic EQ starts with the “Tone” knob, which when turned clockwise, produces more highs and less lows and vice versa. The "Body" control sculpts the mid response from all-out scooped, to a heavy mid EQ. These two deceptively simple knobs offer a wide range of tones available at your fingertips. 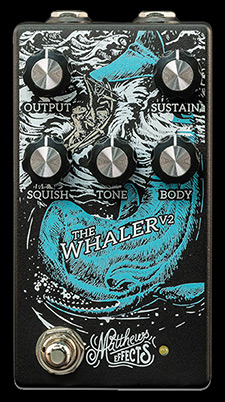