You know the deal: That enormous rig – a Hammond® with one or maybe even two Leslies® – taking up so much floor space in your crib delivers to-die-for tone. You’re riffing away, enraptured, when a depressing realization bursts your bubble: You’d give so much to be able to play with precisely this sound on stage. But the colossal weight of this antiquated musical furniture is an insurmountable obstacle for the gigging musician. And although your digital Hammond clone hits the sweet spot, the weak, anemic Leslie effect is a turn-off.

Guido Kirsch, the man and mind behind VENTILATOR, was similarly frustrated with this situation. So he took just about every analog, digital, and mechanical rotary effect on the market for a test drive, which only served to aggravate rather than alleviate his dissatisfaction. He even combined several devices, tweaked and fine-tuned parameters, and experimented with pre and post effect equalizers to finally conjure a sound that wasn’t half-bad. Still, though, there was that nagging wish for someone to find a way to pack all the sonic glory of a mammoth Leslie into a petit stompbox!
At that moment, the idea to build VENTILATOR was born.

Aiming high to satisfy even the most discriminating standards, Guido programmed a novel rotary effect unprecedented in sophistication and complexity. There is as much computing power at work in VENTILATOR as other vendors devote to an entire organ including a Leslie® effect!
Seeking to transcend technical limitations and get as close to the original as possible, he poked, probed, sampled, and analyzed a sweet-sounding original model 122 Leslie®. Armed with this knowledge, he then worked out VENTILATOR’s algorithm, A/Bing it with the original, and refining it until the result was truly gratifying. Two years of painstaking development effort culminated in a rotary simulation that outshines all other Leslie clones with its unmatched authenticity. The result surprised even its maker!

Neo Instruments is introducing the Ventilator II, the successor of the original Ventilator model. 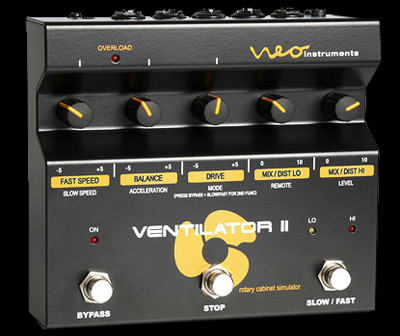