Wildwoodians, we are delighted to present the Marshall Origin 20C, an all-tube amp with the spirit of a vintage Marshall and modern refinements that cater to the needs of discerning players. First and foremost, it delivers authentic Marshall sound: sweet, warm cleans along with punchy overdrive and glorious snarling distortion and rich harmonic response. Our friends at Marshall imbued the Origin 20C with these classic sounds by using a tried-and-true complement of tubes: three ECC83 preamp tubes and two EL34 power tubes. With its simple controls, it's easy to make those tubes sing right out of the box. Dial in your frequency response with the powerful three-band EQ, add presence to taste, and find the perfect amount of drive with the gain and master volume knobs, and you're on your way to Sonic Valhalla.

If that were all the Origin 20C had to offer, it would be a ripping single-channel amp full of incredibly inspiring tones. But, our friends at Marshall have added a few wonderful new ingredients to their sonic cocktail that make life easier for players. Using their PowerStem technology, you can drop the Origin 20C's wattage from a powerful twenty on high power to three watts on middle power or half a watt on low power. So, you can practice or record at neighbor-friendly volumes without losing responsiveness and openness, and you can easily manage your stage volume for larger or smaller venues.

The Origin 20C also has a really cool Tilt control, which mimics the response you get from jumping the channels of an old Marshall. Originally, most Marshalls had a channel with a warm voicing and a channel with a bright voicing, and players would run a cable between them and blend the two channels using the volume controls. Similarly, the Origin 20C has two preamp circuits: one with more brightness and snarl, and one with more woody punch and warmth. With the Tilt knob at noon, you hear both equally. If you turn it all the way to the right, you get only the bright channel, and if you crank it to the left, you only get the warmer channel. At all points in between, you'll find an inspiring mix of these two spectacular sounds. This intuitive design gives you the ability to alter your sound on the fly with incredible ease.

On top of that, the Origin 20C has a boost function that you can engage with a push-pull with the included footswitch to push the amp over the top. Marshall based the circuitry of the boost on the 1959 circuit, so it lends the amp extra girthiness and warmth while boosting volume.

As you can see, the Marshall Origin 20C is an exciting, dynamic amplifier that provides the classic Marshall playing experience at an incredible value. Its modern enhancements allow you to adapt your tone and volume to attain whatever variety of Marshall mojo the situation requires. We invite you to take one of these killer amps for a spin and experience a return to the origins of rock tone. We're sure you'll be grinning from ear to ear after one big power chord! 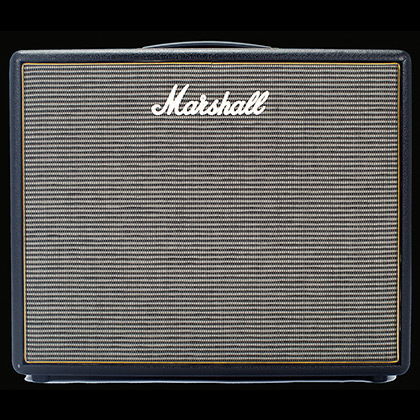