The First Chapter of the Marshall Legend

Perhaps one of the greatest ironies in rock in roll history is that Jim Marshall, inventory of the most iconic guitar amplifier of the sixties, was a drummer. Back in 1962, Mr. Marshall opened a drum shop/lesson studio, and a couple of unsavory characters by the names of Pete Townshend and Ritchie Blackmore started hanging around his shop, bugging him to make a louder amplifier. You see, the public address systems of the early sixties were rather wimpy, and guitar players had to push a ton of air to be heard in big venues. Mr. Marshall gladly obliged them, and he built twenty-three one-off amps for rock and roll's elite.

But, Marshall's first handful of amps were quite expensive, and Jim wanted to produce something that would be more accessible to more players. Having little electronic experience himself, he enlisted the help of Ken Underwood, Ken Bran, and Dudley Craven to build an affordable amp based on the Fender Bassman circuit. In their respective garden sheds around West London, the three men built six prototypes of the JTM45. Though they based their design on the Bassman, it quickly morphed into an entirely new animal. It was much easier to kick into overdrive, and it had more treble presence; in other words, it was totally awesome. Guitar players like Jimi Hendrix, Eric Clapton, and Angus Young thought it was awesome, too, and the JTM45 immediately became their amp of choice. Thus, Marshall's status as the backbone of sixties rock was established.

Now, our friends at Marshall Amps have issued a stunning recreation of the original production-model Marshall, and it lives up to the legend. Let's take a closer look and see what makes these reissues so special!

The modern JTM45 is quite similar in construction to the original. It features three ECC83 preamp tubes and two 5881 power tubes with a GZ34 rectifier tube. This complement of tubes gives it a glorious vintage tone. All in all, it's one of the cleaner vintage-style Marshall amps, making it a perfect pedal platform for players that want a little extra Marshall grit. Its clean sound is warm and woody in the mids and lows and sweet in the trebles, and it works beautifully for just about every application.

However, when you crank it, you'll understand why its vintage predecessor shaped the sound of rock and roll. It has the midrange bark, low-end punchiness, and singing high-end that inspired countless guitar players to plug in, crank up, and rock out. Though no one will mistake the JTM45 for a heavy metal amp, it has plenty of grit, and it will excel in any situation requiring medium-to-low gain overdriven tones. Truly, it has a delicious combination of punch and crunch! So, it's a monster for blues and just about every variety of rock and roll. Within the vacuum tubes of the JTM45 reissue, you can hear the DNA of rock, and this classic sound is sure to inspire you to embark on all sorts of fretboard adventures.

We're proud to present the JTM45, and we have no doubt that you will love it as much as we do. 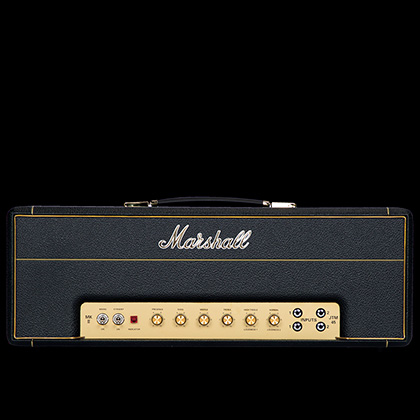