The origin story of the Marshall Super Lead 100--model number 1959--begins with a simple problem: rock and roll needed to get louder. As concerts got bigger, the public address systems of the day didn't have enough juice to project over crowds of thousands of screaming fans. Pete Townshend and John Entwhistle of The Who wanted louder amps to properly fill the large stadiums they were playing with sound, so they asked Jim Marshall to build a more powerful version of the Marshall JTM45. Jim Marshall was never one to back down from a challenge, so he got to work, and by 1968 he had perfected the 1959. With its 100-watts of tube fury and iconic plexiglass panel, it entranced many members of rock royalty, and it became the amp of choice for Cream, Jimi Hendrix, Small Faces, Jimmy Page, Angus Young, and countless other legends. They brought their live rigs into the studio, and, as a result, the sound of a cranked model 1959 essentially became the sound of rock and roll. Now, our friends at Marshall have issued a handwired version of these hallowed amplifiers, and they have captured the sound and the fury of the originals beautifully.

The 1959HW is a simple amp that gives the player simple joys. Playing through one makes you feel like you stepped back in time to the late sixties to make a classic record no one has heard before. There's no other way to put it: it just sounds like rock and roll! Big, muscular low-end provides a foundation for punchy, snarling midrange and articulate singing trebles, and it has that trademark rich harmonic response that made Marshall a household name. It can do delicate, sweet, warm clean sounds at lower volumes, and it sounds really nice on the edge of breakup, but it shines the brightest when you crank it. As Marshall's website puts it: "The louder you play, the better it sounds."

Best of all, it's really easy to dial in these iconic tones, because there are no frills to be found anywhere on the 1959HW. It has a 3-band EQ and a presence knob that allow you to summon whichever flavor of Marshall tone you need by dialing in your preferred frequency response. The only real trick to using it is jumping the two channels, which gives you additional ways to shape your sound. The 1959HW has two channels with two inputs apiece: a brighter Lead channel and a warmer Bass channel, each with high- and low-sensitivity inputs. If you plug into one channel, you can plug a small patch cable into the other input on the channel you're using and "jump" to one of the inputs on the other channel. When you do this, you can blend the two channels using their separate volume controls. No matter what settings you use, no one will mistake the 1959HW for any other amp, but, when you jump the inputs, you can find all sorts of subtle hues and shades of sonic color within the classic Marshall sound.

We are proud to present the Marshall 1959HW, a direct descendant of the amp that defined the sound of rock and roll and inspired a generation of guitarists to tune up, plug in, crank the volume, and let it rip. It carries the DNA of rock and roll within its power tubes, and it has the power to lay waste to cities and vanquish challengers. When you play one loudly through a 4x12, it's impossible to not be overcome by a sense of child-like joy. We invite you to take one for a spin and experience the delights these handwired pieces of history have to offer firsthand. Once you do, we're sure you'll be grinning from ear to ear after the first power chord rings out. 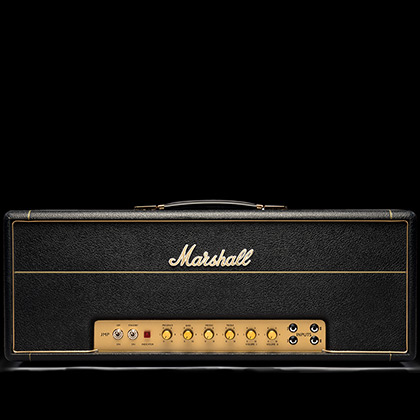