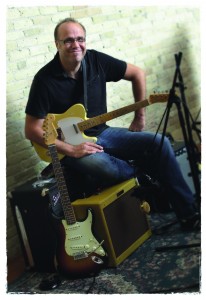 People have inquired as to how much I practice. They ask about what I practice and so on. I am always flattered when folks inquire but I’m also a little perplexed. The reason for my confusion is that in my opinion, in order to be at a level of excellence at anything but particularly at being a musician who plays music that is really mastered by learning things by ear, you have to have a certain degree of an obsessive compulsive nature. From the day I started the dreamy quest at age 12 for optimum guitar savagery that would hopefully provide me sustenance and unparalleled glory, I have thought of relatively little else, every waking hour since. In my mind, the practice never ends. Sound crazy? Well, there isn’t an hour that goes by that I’m not thinking about playing, actually playing, listening to music that pertains to my playing, reading a book about music, thinking about my sound and how to make it better, writing a song, recording a song, booking gigs, contemplating band personnel etc. All of these things have a major impact in how my music comes across so they all are important pieces that go beyond sitting with a metronome for X amount of hours. I don’t bowl, golf, belong to clubs…I’m very involved with my family consisting of a wife and four kids, so other than pursuing my career and doing family stuff, there is time for little else. I’m not complaining…I wouldn’t change a thing…other than maybe my hair line.

When I was younger I did practice with a metronome. I went to school for music and I would put the metronome on and practice my major scales up and down the neck in the circle of fifth’s. I would then do it with all the different intervals and so on. I learned my whole tone, diminished, harmonic and melodic minor scales and how to use them as well as chordal exercises to expand my vocabulary. In truth, the vast majority of the playing I am known for was learned from records, tapes, CD’s and MP3’s. I never transcribed solo’s in their entirety but would rather concentrate on gleaning certain licks or certain ‘feels’ so I could speak in the language of the player I was trying to emulate all with an eye towards mutating those elements to making them my own. I still do this to this very day. I can’t tell you how many hours a day I currently practice or used to practice because it has always fluctuated but it has been a constant and unrelenting quest for me to get better and to learn new things. When I have a guitar in my hands I lose track of time and the moments seem to evaporate. As a result, the concept of ever being bored in foreign to me!

About Greg:  An unsung guitar hero from Milwaukee, Wisconsin, where he grew up just a few miles from the Waukesha birthplace of the late, great guitarist-inventor Les Paul, Greg Koch has established himself within six-string circles as a masterful technician, accomplished clinician (for Fender) and general bad-ass guit-picker. No less than guitar virtuoso Steve Vai noted Koch’s six-string prowess and promptly signed signed him to his Favored Nations label in 2001. Tom Wheeler from Guitar Player magazine hailed him as “fiendishly talented” while other critics have called him everything from “a twisted guitar genius” to “the best kept secret in the guitar firmament.”