Wildwoodians, we have to be honest: we are suffering from severe Wildwood Select Withdrawal. Our Wildwood-exclusive run of Les Pauls was such a massive hit that we are fresh out of them for the moment. To be sure, this is a good problem to have, and we want to thank all you incredible Wildwoodians for the support that made them a runaway hit. But, absence makes the heart grow fonder, so we wanted to do something to keep the blues away while we wait for the next batch to arrive. So, our resident Guitar Scribe, Trevor, sat down with Wildwood’s resident Les Paul fanatic in hopes of understanding why these guitars capture the hearts of players so easily. As always, if you’d like to snag a guitar from the next shipment of Wildwood Selects that we receive, you can email sales@wildwoodguitars.com for more information about pre-ordering. Wildwood Selects always fly out the door at the speed of light immediately after they arrive, so make sure you don’t miss out! We will receive our next shipment after Gibson re-opens its factory. Though we’re not sure when that will be, we will keep you updated on the timeline as we get more information. Now, read on as we dive into the magic behind the Wildwood Select Les Paul!

After spending a day playing one of our new Wildwood Select Les Paul Standards, one thing became immediately apparent to me: these guitars are greater than the sum of their parts. Yes, they have hand-picked tops, exclusive pickups, and special finishes. But those factors alone don’t account for the magic that seems to live beneath their maple tops. They possess a certain “it” factor that seems to push anyone who plays them to reach new heights of creativity. I watched every member of the Wildwood staff get carried away by the prototype when I arrived.

Observing this process made me intensely curious, because I am a tad skeptical of things like “mojo.” Yet, I was unable to deny that there was something extra in the Wildwood Select, because when I tested it out, it definitely carried me off to fretboard nirvana and kept me there for long enough to seriously annoy everyone who shares a wall with my office. I wanted to understand why it’s so easy to get lost in Wildwood Select Les Paul’s fretboard, so I sat down with Wildwood’s resident Les Paul fanatic Steve Stuart to ask him a few questions in hopes of discovering what the secret ingredient is. It turns out that it’s something called “man glitter.”

Apart from being an excellent band name (“Coming to the stage…Man Glitter!”), man glitter is what Gibson employees call the sawdust that seems to cover your entire body after you get done sifting through piles of wood. It gets on your shoes, in your coat, in your nose, and in your hair. While it may be a bit less glamorous than fairy dust, being covered head-to-toe in sawdust as you dig through pieces of maple is still a magical experience for a Gibson fan.

No one at Wildwood is more familiar with man glitter than Steve Stuart. As our Gibson brand manager, he has made dozens of trips to the Gibson Custom Shop and sifted countless piles of maple to pick tops for our Custom Shop Wildwood Spec Les Pauls. But, until recently, he’d never gotten the man glitter treatment from Gibson USA. That changed when our friends at Gibson agreed to build a run of Wildwood-Exclusive USA Les Pauls—a first for Wildwood and Gibson!

It’s hard to imagine anyone better suited to head up such a task than Steve, because he has loved Les Pauls for his entire musical life. They first stole his heart when he was just getting started on the guitar. Someone put an Epiphone Les Paul in his hands and, according to him, it “immediately felt like home.” From that day on, the Les Paul was his weapon of choice for the stage and the studio as his band toured with acts like Switchfoot and The Used.

Once Steve’s touring days were over, he moved to Colorado to work for Wildwood. He was already a long-time Wildwood customer, so it seemed natural to make him Wildwood’s Gibson brand manager. Ever since, his passion and enthusiasm for Les Pauls have shone through every day, and he brings that energy with him whenever he visits Gibson.

Before we dive into the wood selection process, I’d be remiss if I didn’t mention the real heroes of the Wildwood Select story: the fine folks at Gibson USA. They’re the ones who made this dream a reality with their boundless creativity, their impeccable craftsmanship, and their obsessive drive for six-string perfection. The men and women of the Gibson USA plant are responsible for making these guitars sound great and play easily with their skills, but their passion is responsible for giving Wildwood Selects the things you can’t see. Call it mojo, call it vibe, call it whatever you want, but it exists because our friends at Gibson pour their heart and soul into each guitar. We may sprinkle a little Wildwood fairy dust on top by picking tops and asking for special pickups, but they make the real magic happen.

One perfect image gives us a significant clue about the source of the Wildwood Select’s powers, though. Dig, if you will, a picture: Steve Stuart, a Gibson expert who has spent most of his life either playing and selling Les Pauls, covered in man glitter as he leafs through stack after stack of maple to find the perfect pieces that will make beautiful instruments. It’s not rocket science: when a talented person is willing to get their hands dirty to help make something they are passionate about, something awesome happens.

When Steve rolls up his sleeves and sifts through stacks of maple, he’s not necessarily looking for one particular type of top. Like many other guitar players, Steve loves the fact that each and every Les Paul has a distinct personality. Steve tries to get as many unique grain patterns as possible so that each guitar has a unique style and swagger. All are jaw-dropping, but in their own individual way.

For Steve, going through these tops and finding the ones that tell the most compelling story is a process that inspires him profoundly because of his reverence for his surroundings. As he puts it, “You can smell the nitro, you can smell the sawdust, you can smell the maple. You’re immersed in it. You’re picking a top that will tell a story that will connect with someone on a personal level and bring them joy. They may sound flowery or syrupy-sweet, but it’s true.”

Anyone who really loves Les Pauls knows that Steve isn’t being syrupy-sweet at all here, because when your guitar looks cool to you, you feel more connected to it. It’s another way of helping players bond with their instruments, which is what we’re all about here at Wildwood.

Of course, the other way an instrument can win your heart is with its voice. After all, who cares how beautiful a guitar is if it doesn’t sing? To that end, Steve worked with our friends at Gibson to tweak one of their existing pickups to enhance the instrument’s expressiveness. Basically, Steve asked Gibson to wind us an underwound version of a classic PAF, and the electronic wizards at Gibson came up with a pickup that puts the player’s personality on full display.

How can a pickup make you play more like yourself? Well, like a remedy for a swollen ankle, the answer has a lot to do with heat and compression. To put it simply, the hotter a pickup is, the more it compresses the signal, which makes for less dynamic range but a more consistent sound.

However, when you underwind a pickup, the opposite happens. The guitar sounds more open and expansive, and it has a wide dynamic range, which makes for a remarkably expressive playing experience. The Wildwood Select ’59 Tribute humbuckers allow you to affect the sound of the instrument considerably with just your technique, giving you a wide palette of sonic colors to express yourself with. It still sounds like a Les Paul with PAF-inspired pickups, but your personality as a player helps shape the voice of the instrument. 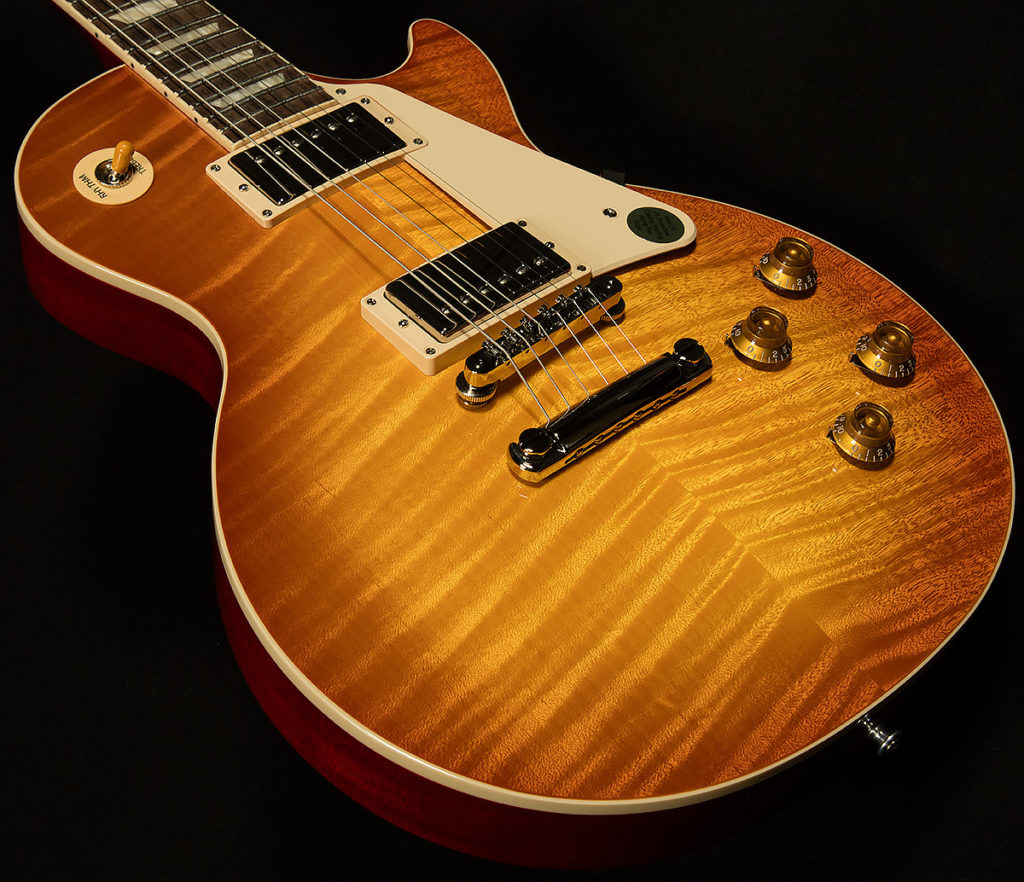 Personality. That word came up more than any other during my chat with Steve, and I think it is the key to understanding the magic of the Wildwood Select Les Paul Standard. Visually, his aim was to give each guitar a strong personality that tells a story. Sonically, his goal was to give these guitars a voice that amplifies the player’s personality. The end result is a guitar that is distinctive, and also distinctively you. It’s hard not to fall in love with an instrument like that.

Passion was another word that came up a lot, and here is where we leave the realm of the empirical. The last important ingredient is the passion Steve and the masterful craftsmen at Gibson have for these instruments. As Steve put it, “If you’re passionate about something, and you really care, it imbues the instrument with a creative energy that is impossible to explain.” In other words, the Wildwood Select Les Paul will inspire you because it’s a passion project for everyone involved at Wildwood and Gibson, and you can feel that energy the moment you plug in.

At one point in our conversation, I asked Steve why he thought so many people become Les Paul collectors. “When you find one that speaks to you, it’s like finding an old friend,” he replied. With that in mind, our friends at Gibson did everything in their power to make sure that the Wildwood Select Les Paul Standard feels like a long-lost pal from the moment you take it out of its case, and that is why these guitars resonated with all of us so deeply. We have no doubt that they will make your heartstrings ring out, too.