Our friends at Marshall Amps have always pushed the limits of electric guitar amplification to get more gain, more volume, and more attitude into their circuits. Naturally, when the age of hard rock and metal dawned in 1981, they had to in on the action, so they built the JCM800 (the name, incidentally, was taken from Jim Marshall's initials and license plate!). After a few iterations, the JCM800 reached its final form, the fabled 2203, which rapidly became the go-to amp among most guitarists with either big hair and/or a mean disposition. Now, our friends at Marshall have reissued this classic amplifier in all its glory, and their recreations capture the spirit and mojo of the originals with stunning accuracy.

For all things hard and heavy, the JC800 2203 reissue handles business with aplomb. It has tight but powerful bass response, beautiful midrange crunch and snarl, and meaty high-end with just the right amount of chime. It has the articulation to capture all of the details of your attack, so it will chunk and chug with the best of them. It has the sort of sound that puts you in touch with the primal, raw power of rock and roll. But, it's more than a heavy amp, and you can dial in some wonderfully clear, crystalline clean sounds, too. As an added bonus, it's one of Marshall's only vintage reissues with a master volume, so you can get thick distorted tone at neighbor-friendly volumes.

We're proud to showcase the JCM800 2203 reissue because it has all the magic of a vintage amp with modern reliability. Playing a big E power chord through this amp makes you feel like you just drove a monster truck over a half a dozen rusted old cars. We invite you to plug in, crank the volume, and experience the joy of the JCM firsthand. 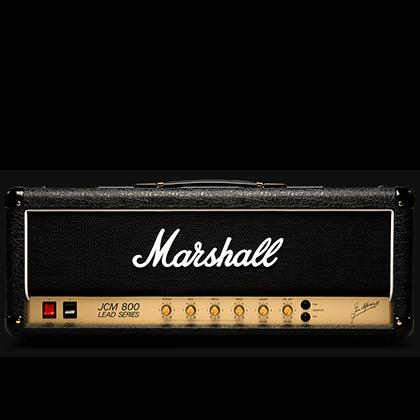