The last horse to win the Triple Crown was a stallion named Justify in 2018, but he had to train like crazy and his owner had to invest a ton of money to get him in tip-top shape. Why expend that much effort when you could have a much more satisfying Triple Crown victory simply by plugging into the Mesa/Boogie TC-50? It's one of the most fantastically versatile amps out there, and it covers a shocking amount of sonic territory with its three channels. Even cooler, you can swap the stock EL34s for 6L6s or 6V6s simply by flipping the Bias Switch. As long as you use Mesa/Boogie tubes, no trip to the amp tech needed! Let's dive a little deeper and explore the many delicious tones hiding within the circuitry of this thrice-crowned champion.

Think of each of the Mesa/Boogie Triple Crown's channels as a mighty ancient weapon with a jewel-encrusted hilt designed to slay a different type of monster (yes, it does sound good enough to warrant such fantastical comparisons!). In general, all channels have strong midrange response and an uber-tight, lightning-quick attack.

Channel one absolutely rules the arena when it comes to clean sounds, delivering delicious three-dimensional, full-bodied tone with crystalline purity. Using the simple-but-powerful EQ, you can get everything from woody warmth to sparkly jangle to twangy country, and it works beautifully as a pedal platform. You can also turn on the drive switch to get some wonderful vintage-style crunch perfect for blues and classic rock.

Channel two is full of delicious mid- and high-gain sounds. With the gain knob rolled back, you'll get arena-worthy overdrive that conjures the spirit of the seventies. At around noon, you'll get roaring distortion capable of carrying you to Valhalla and back that are suitable for all kinds of hard rock and metal. When you dime it out, it delivers the hammer of Thor and wallops you into modern high-gain territory.

Channel 3 is like if you aimed an Enlargement Ray (a totally-real, scientific thing that exists) at a mountain lion and made it the size of Godzilla. In other words, it totally slays for all things high-gain; in fact, the folks at Mesa/Boogie say it is their highest-gain channel out of any of their amplifiers--no small statement for a company that pioneered heavy guitar sounds! It sounds glorious for just about any variety of modern metal requiring precision and aggression. Despite its brutality, channel 3 delivers superb note separation and clarity. And, in channels 2 and 3, you can engage the tight switch if you need extra articulation and focus.


Find the Tube For You

As you can see, the Mesa Triple Crown covers ALL of the sounds in its stock EL34 configuration. But, that only touches the tip of the iceberg when it comes to the sounds waiting within its wires. Thanks to the expertise of Mesa's Tone Wizards, you can safely swap out the stock tubes for 6L6s or 6V6s without re-biasing the amp as long as you use Mesa/Boogie tubes. Doing so alters the character of the amp significantly, giving you even more tones and hues with which you can paint your sonic masterpiece. Placing 6L6s in the Triple Crown gives it beefier low-end response and rounder trebles, while dropping in 6V6s lowers its output and gives it more of a vintage-style response with earlier breakup and creamier frequency response. As you can see, the TC-50 certainly wins the Triple Crown when it comes to tubes!

Of course, the TC-50 is built from only the highest-quality components, and it is rigorously tested to ensure maximum reliability by the obsessive quality control department at Mesa/Boogie. It also comes packed with features that discerning musicians crave. We're talking lush, atmospheric reverb from a 3-spring plate, a CabClone output so you can run direct live or in the studio, and a headphone output for noiseless practice. As a cherry on top, the TC-50 is MIDI capable, and you can use a foot controller of your choice to access a bank of up to 256 settings if you are so inclined. Best of all, you can save them with one touch using the Store switch! Truly, the TC-50 delivers all the things that a modern player needs.

Wildwoodians, we are proud to present the Triple Crown 50, an amp that delivers ALL the sounds. Its wide palette of sounds is sure to inspire boundless musical creativity, and we have no doubt it will compel you to embark on all sorts of exciting fretboard adventures. 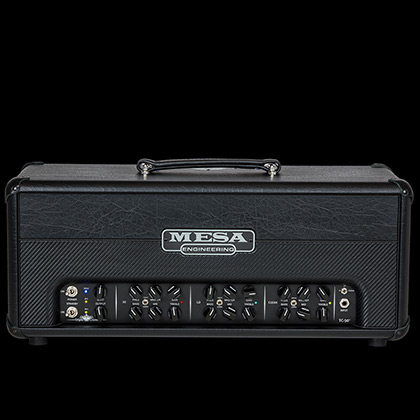