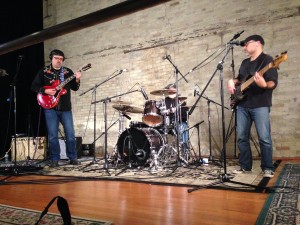 I just got done recording a “live in the studio” project with the original lineup of my band, Greg Koch and the Tone Controls which features Gary Koehler on drums/vocals, Kevin Mushel on bass/background vocals and myself on guitar/vocals. This power trio first formed in 1990 in Milwaukee, Wisconsin and we specialized in administering steadfast face-meltings in clubs and at festivals behind the Cheddar Curtain. This original incarnation played for about 5 years before being pulled apart for one reason or another but it was and is, a truly unique and powerful ensemble whose spirit was never really captured on tape until now. The years have tempered the face-melting into a fine, velvet-hammer bludgeoning:) The CD/DVD that we recorded documenting this mayhem will be unleashed in spring of 2015.

After doing some gigs with this band over the last year and feeling the magic return in more ways than one, I began musing on the best way to record with this lineup, especially trying to capture some of the old original tunes that never ended up on releases or never recorded at all. I finally decided to call a friend who has a recording studio/video facility in Milwaukee where we could play “live” while having the whole thing captured on audio and video. After making the phone call we set the dates for recording for the following week. It came together that fast!

The trick was how to get everything to sound good while being in the same room and trying to get some separation in case we wanted to fix anything in the performances after the fact. We ended up deciding to isolate the bass rig, have the drums and guitar rig in the main room and all three of using in-ear monitors to use while singing into standard vocal mics. My compatriots were a little skeptical that my guitar volume would not run roughshod over all else but I had a secret weapon at the ready which I will describe in a moment.

The first night of recording I brought in my Fender Custom Vibrolux amp which I bought new in 1996 and have beaten senseless since then along with a brand new, Fender ’68 Vibrolux Reissue that I recently procured. I have been running two amps lately in stereo with my NEO Instruments Ventilator Leslie simulator which sounds frighteningly good.

I have always been a believer in turning tube amps way up in the studio to get the best tone but a recent tour that I did in Europe changed my thinking for this project. I was playing at a very small club in Germany the first night of our tour and the folks at the club recorded us. I was playing with a Fender Super Reverb Reissue with the volume on 2 and I used the Jetter GS124 Dumble-style, overdrive pedal to add some meat to the tone. I ended up having the Jetter ‘on’ 99% of the time and used the volume control on my guitars to go between dirty and clean. When I heard the recording the next day I was flabbergasted at how good the guitar tone was. There was none of that grainy, harshness that you usually get when using an overdrive pedal when the amp is turned down. I knew this would work for our recording session with my two Vibrolux’s and, sure enough, with an amp’s volume on 1 and the other on 2-with the Jetter GS124 ‘on’, it sounded massive without being too loud as to bleed into everyone else’s mics.

My bandmates had molded, in-ear monitors that they were used to and I purchased a pair from a music store that day that I hoped would work. They did not adhere to my ears very well and I couldn’t hear the bass at all so after several attempts I decided to use earphones. The video won’t look quite like we wanted but I would rather have good audio performances than not!

My main guitars as of late have been a white, Fender Custom Shop Wildwood 10, ’57 Strat Relic and a sweet cherry, Gibson Custom Shop Wildwood Spec, ’57 Featherweight Les Paul both outfitted with the new Fishman Fluence pickups. I am involved with Fishman with the voicing and promotion of these pickups and I have been blown away at how great they sound and how useful they are. It’s hard for me to play anything else because of the clarity, versatility and functionality of the tones of these guitars. I brought these two guitars along with my Wildwood Spec ’59 Les Paul with a glorious top and my recently procured 50th Anniversary ’63 cherry ES-335.

All I can say is, it became clear pretty quick that the beef of the Gibson tones is what was called for on this recording. I had been using the Les Paul with the Fluence Pickups at gigs along with the Strat for the past year and folks would always remark that the strat sounded great but that the Les Paul sounded so meaty yet bright that they were astonished by the tone. The Fluence pickups definitely capture the tone of the original PAF’s so that a Les Paul truly sounds like a meaty telecaster. I started off using the cherry Les Paul (Little Red) and thought I would end up using it on all the tracks. At some point I picked up the ES-335 (Big Red) and it had a massive, woody tone that found it’s way on several of the the tracks.

I started the second night of tracking with my Wildwood Spec ’59 and it sounded glorious as well. All three of my humbucker fueled guitars were used and they all sounded different but equally sinuous and triumphant. I used the volume control on all three guitars to go between clean and dirty and the GS-124 was ‘on’ the whole time. I am totally pleased with the girthsome majesty of the tones we were able to capture. 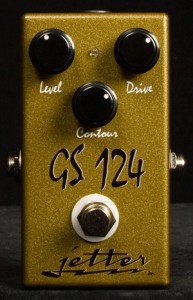 We ended up recording 12 keeper tracks and none of them need any fixing although there are a couple of split-second, parts of songs I may cut and paste. We haven’t yet decided whether it will be a CD/DVD or just a DVD. If it is only the later, I would keep the audio ‘as is’ but if we do a CD as well, I may fix two little spots just so the parts of the tunes are right. The leads I am leaving alone with all the filth included!

I look forward to getting this project out soon and I hope you are interested in picking up a copy when it is done!

Thanks for your interest and support!